In this blog post I will show you how to build a External C2 in your C2. Excuse me I can not show any actual code in my C2 Framework (Falcon One).

What is the External C2?

Cobalt Strike 3.6 introduced a new feature that’s called External C2, to provide the operator a power to build his own communication channel.

I will go through why it’s powerful feature, but before that I would let you imagen how is the communication should be. 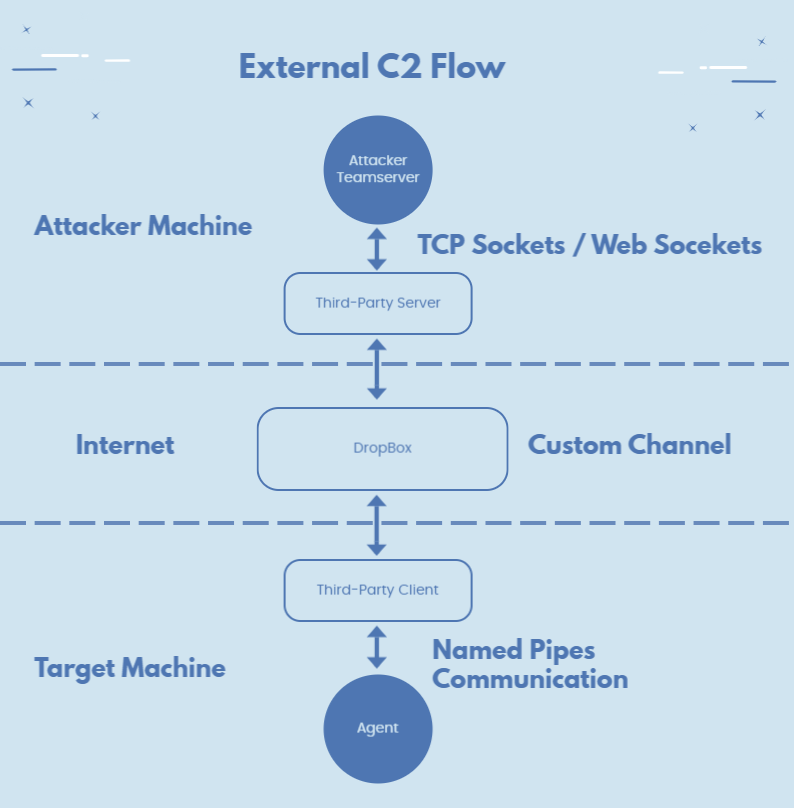 And in the Target Machine we can found Third-Party client and the Main Agent. In the normal case the thrid-party should locate a memory space to inject the shellcode of the agent into it and execute the agent, but in our case I will run the agent manully. when the agent start running it’ll create a named pipe to send and receive the data with the third-party client. and the main goal of the third-party is take the new tasks (commands) from the Dropbox and send it to the agent process through named pipe and receive the task results and send it back to the dropbox. 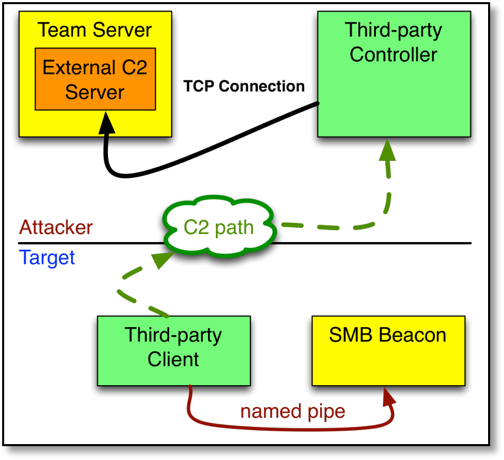 I will let you answer this question by yourself.
Lets assume there is company uses/trust dropbox for example. and allows the in and out connection.
Looking for some words of wisdom? it is unrealistic to use untrusted domain to get your shell connection. So, in this case you can use dropbox to initial your connection and start communicating via trusted domain. So, is it useful or not?

To be aware there is alot of abuses you can do in named pipe I may go through them in the up coming posts. but now lets talk about the mechanism of named pipes.
Named pipe is documented by Microsoft, Full documentation of Named Pipe

What is the Windwos Pipe?

Windows Pipe helps when you need to communicate with two applications / processes using shared memory.
You can interact with this shared memory like file object, like ReadFile() and WriteFile(). Named Pipe is implemented on First in First out (FiFo) which means when you write data to a pipe and needs to read it, once you read it the data will not be available anymore, the data will be poped out.
But what if we have three application communicates togther and need to keep the data available. In this case you can use WinAPI function that’s called PeekNamedPipe in windows. I will go through it soon, but shortly this API can be used to read the data without removing.

There is two types of windows pipes.

Named Pipes have a name, but anonymous pipes doesn’t have name.

So, now you have a good base knowledge to start building the demo.

In this structure we didn’t use any custom channel like dropbox, Because this is just for a demonstration but you can build that between the Third-party connectors (server and client). And figure these connectors to send and receive the tasks and task results via that custom channel (Dropbox, Slack, etc.)

I have built a quick python script to enumlat the teamserver, because I don’t want to share my C2 source code at this moment I just need to re-write some parts and clean most of it and I’m too lazy to do that. So I decided to build a quick python script that sends tasks to the third-party server through TCP connection.

As we agreed the third-party server just takes the data form the teamserver to deliver it to whatever channel you pick. in this case I’ll do a basic setup by passing the third-part server tasks to the another third-party client which located in the target machine.

So, Now we have both teamserver and third-party server. So, what else we need to do? We need to implement the named pipe creation, write ,and read functions in the agent(Payload/Implant/Beacon), then write our third-party client functions.

Just For Clarify: Cobalt Strike or any other C2s has a Shellcode generator feature, to generate a shellcode for your agent. What that means? That means they can just allocate a virtual memory space to inject the shellcode when the third-party client begin starting then continue the third-party normal actions like listening to the named pipe to send and receive the data. But in our case I will not generate a shellcode for the agent I will run separately.

If you remember when we spoke about Windows Pipes. You can interact with it like a file object. So all we need to do is:

Its so simple all we need to do is:

For sure when our agent start execution will create our named pipe. Then will wait until someone connect to it to start reading and writing data into the pipe.

Here is Example on main function.

NOTE: Buffer_Max_Size you will need to define it by adding the following: #define BUFFER_MAX_SIZE 1024 * 1024

If you noticed we have opened the named pipe through CreateNamedPipe WinAPI function. this function is well documented by Microsoft, but for a quick view we just made our pipe PIPE_ACCESS_DUPLEX that means the third-party client can read and write into it. and made just accept one connection you can notice that in the arguement number 4.

The write function will take 3 arguments:

And its like TCP sockets we will need to add our data size before the data to makesure the client and sever side will read all the data.

The read function will take 2 arguments:

And as we did in write function we just wrote the first 4 bytes with the size of the next data. we will need to get the 4 for bytes to know the exact data we need to read. and that could be done through the following code sample:

So, I have created function called connect to connect to the TCP server.

Opening Named pipe handle is like opening a file could be done through CreateFileA WinAPI.

You can notice the while loop, because the third-party may try to open handle for the named pipe before the agent create the pipe.

If you have feedback please go ahead and DM me on Twitter, See you in the next blogpost.